Posted at 09:57h in Live Performance by Brady
0 Likes 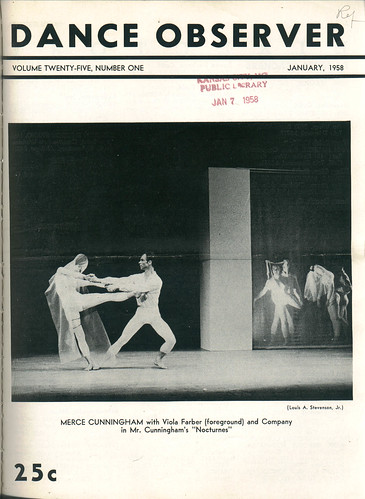 It was a mystery. In 1958, a set of dances with accompanying original music featuring the dancer Merce Cunningham and his partner Carolyn Brown was filmed for broadcast at the NDR television station in Hamburg, Germany. Post broadcast, the film seemed to have disappeared and all that remained was the storied history of the event. Subsequent dancers in the company would hear tales of the experience through sketchy notes and hazy memories. As the decades passed the work was all but forgotten.

In part due to an enterprising memoirist and a devoted archivist at NDR, the film was eventually found in a dusty case simply labeled “Ballett” on a shelf full of unidentified works from the NDR studio’s collection. The work was viewed with great surprise and then eagerly shared with the Merce Cunningham Trust from whence an idea was sprung to show the film and reconstruct the works for a live audience.

Working with the Baryshnikov Arts Center over a year in development, the dances were painstakingly notated, studied, documented and fully choreographed as per their originals. As there was no information other than the film itself the dance company had to make do with the visuals and fill in blanks as best they could. Even the costumes (designed by Robert Rauschenberg) and original music (by John Cage) were studied and reconstructed to bring this piece of dance history back to life. Merce Cunningham Early Works was at last completed and ready for its debut.

Performed at the Baryshnikov Arts Center, the show featured the full length film first. Immediately following, dancers from the company presented the works fully reconstructed. The difference between the film version and the live was astounding. Going from flat movement in black and white to expression in vivid color was astounding. It made me appreciate how important live performances are for an audience. The film was a pleasure if only for its naiveté and groundbreaking choreography. Seeing it live put it on an entirely different level—one that was compelling and spellbinding.

The run was short, just two nights. Hopefully the success of this experiment will allow the work to be placed in the Merce Cunningham cannon and performed again as part of the dance company’s repertoire. It was a memorable experience and one that should remain active and not placed back on the shelf.