05 Jul When Fake is Real

Posted at 19:27h in Art Exhibition by Brady
0 Likes 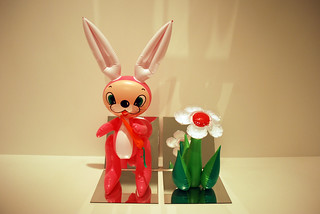 The Whitney Museum of American Art is showing a sweeping retrospective of Jeff Koons and his work from a prolific 30 year career. This stunning display covering decades of art pieces is impressive simply because The Whitney has dedicated nearly every floor to the exhibition and has set up the work in chronological order giving the viewer a precise history of the various shows Mr. Koons created. The highly charged and controversial pieces begin humbly and expand to current works that are both enormous and technologically advanced in their fabrication using utterly new machinery and production methods to meet the highest standards Mr. Koons demands of his art.

The show is deeply enhanced by the audio guide that shares the knowledge of the curators involved as well as the voice of Mr. Koons as he explains his various works and the inspiration behind them. I highly recommend taking advantage of this benefit as it provides much information.

What is most stunning is his ability to create an object that appears to be of one material but is fabricated of something else, such as the famous “blow ups” rendered as perfect copies but made from bronze perhaps or simple stainless steel. They are optical illusions beyond compare. My favorite is a lifeboat made of bronze—a seemingly helpful item that would only drown its inhabitant, making it in actuality a deathboat. 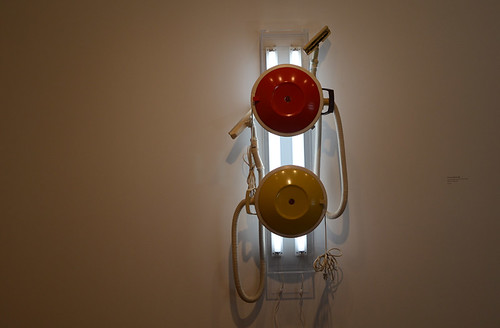 Viewers will also see his most iconic creations, such as the vacuum cleaners encased in plexiglass (from his “The New” show), the floating basketballs (from his “Equilibrium” show) and his infamous ‘Michael Jackson and Bubbles’ (from his “Banality” show). And, yes, there is also a big balloon dog (in yellow) in one of the galleries.

Not only is the art interesting but so is Jeff Koons’ life as you learn about the trials and tribulations of the artist as he trekked through his career making art that was reactionary and responsive to his world as he experienced it.

I have not always understood Jeff Koons’ artwork but this retrospective gave me a new appreciation and understanding of his vision, which in turn made me a fan. 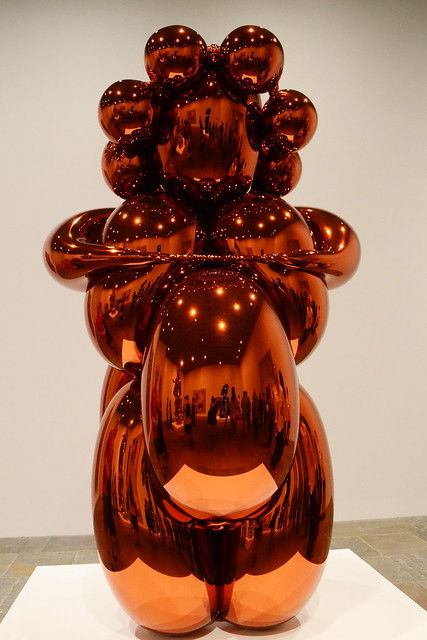 Jeff Koons: A Retrospective runs through October 19, 2014. This will be the final show before The Whitney Museum of American Art makes its move to its new location downtown in New York’s Meatpacking District.